The remaining Three Flags from LillStreet 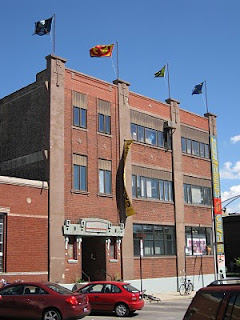 Ooops!
Sorry! It looks like I skipped a month in posting (you know what they say about "the best laid plans of mice and men..."). Anyway here are pictures of the remaining three flags during production.

You saw the Earth flag in my last entry and here is the finished Air Flag: 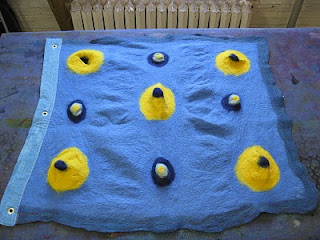 Just like the Earth flag I started with a design marked (with a sharpie) on the backside of a large (taped together) piece of heavy plastic. I used this as the template for laying out my wool. After laying out the first layer of wool I spread out a large sheet of hand-dyed silk on top of that first layer of wool. Then I followed the wool design that showed through the silk and laid out my second layer (so it was a sandwich of wool-silk-wool). Then I wetted and patted the whole thing down and then rolled it up. I rolled it in 15 minute intervals (I hate counting rolls so I go for time). I unrolled in between intervals to check on progress and then rerolled from the opposite direction. I did this for a few hours. After it was done I had the fun of rinsing out the soap. Then I set it to dry (which took a while). By the time I got to the Water flag I was very close to my deadline and didn't have a lot of time for drying. at this point I discovered that my washing machine did indeed have a way to just use the spin cycle. All I can say is I wish I had figured that out with the first three flags. Also, with all three of the remaining flags I corrected my mistake and made sure I dyed the canvas reinforcement to match the predominate color of the flags.
The Air Flag Production: 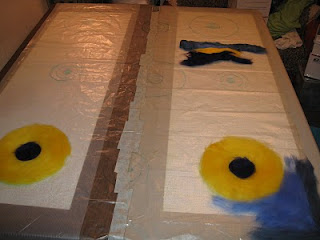 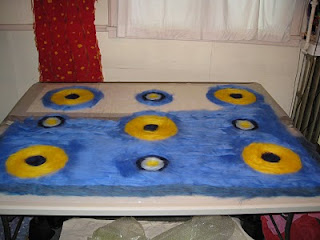 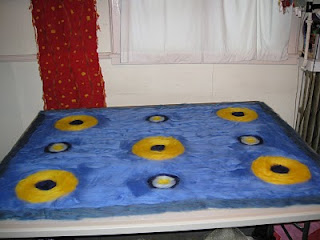 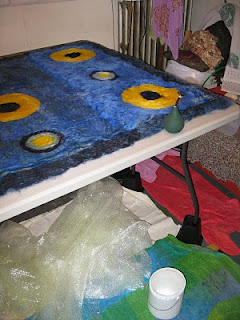 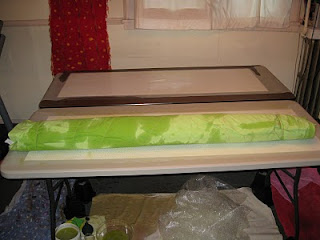 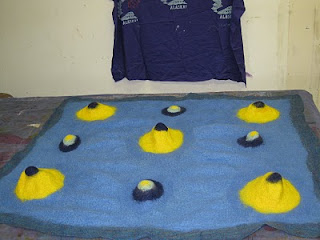 Here is the finished Fire Flag: 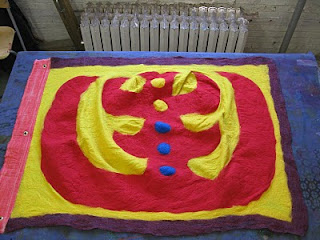 And, here are a couple production pictures (unfortunately by the time I got to the fire flag I was beginning to feel the pressure of my deadline so I took fewer pictures). 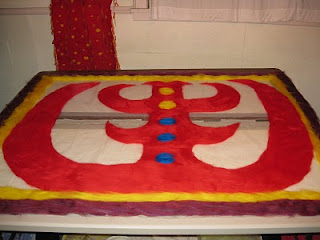 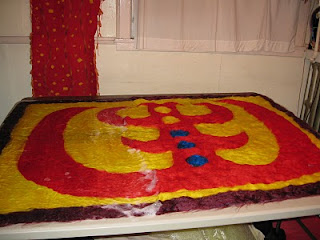 When I finally got to the water flag I realized that I did not like my sketch and started trying to come up with other design ideas. I finally hit on the idea of doing a visual representation of the water molecule 'H2O'. Unfortunately I took no production pictures of the water flag, so here it is finished. I will show you both sides since they are slightly different from each other (I was running out of wool in the colors I needed so I made do with what I had). 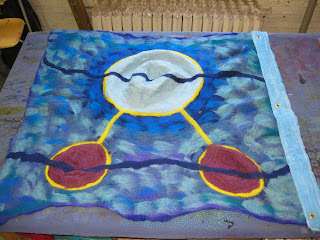 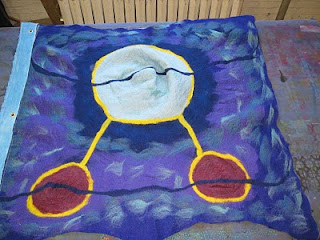 Finally all was done and all that remained was the clean up. 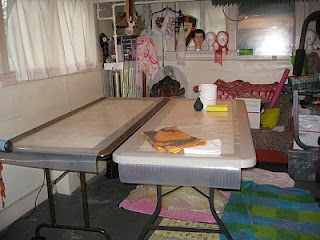 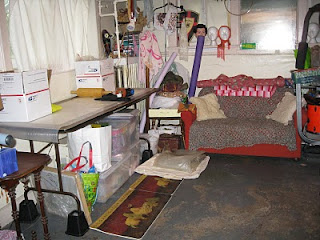 The flags flew until the end of the first full week of July. They weathered four major storms, several days of high winds, and many days of rain without ripping. I was extremely proud and consider the installation/experiment to be a success (I also got many compliments on my work which is always nice). My flags are down now. I just need to take pictures of how they look after Mother Nature had her turn with them. Then at some point I need to re-work them. Hopefully I will get back to a more regular posting schedule now that my social life has slowed down a bit. I hope you all are having a creative summer (and staying cool)! Ciao.
Posted by Frannie at 2:04 AM

How marvelous...and what a way to make your mark on the world...with FELT!!!

Thank you! It was quite the adventure. I had fun. 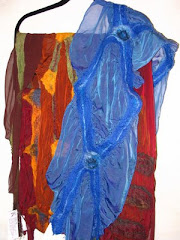 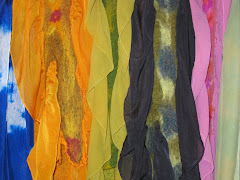